Some of our Placed Scottish Fold Cats

This is a wonderful lady, Eleanor who is the best attorney in New York, and her new Scottish Fold baby. Actually, Eleanor is holding two kittens, Harry on the right and Harriet, his sister, on the left. She really wanted a little boy so Harry was chosen and he couldn't have gotten a better home. Harry lives with two super people, Eleanor and Allan and Sophie, their older Scottish Fold who has taken him into her confidence as her best friend.

Eleanor's husband Allan, the best M.D. in New York and former team doctor of the New York Mets thinks Harry is his Grandson.

Harry and Sophie live on Park Avenue in New York City and they are doing their very best to promote the Scottish Folds of the world. Both are sweet, have wonderful personalities and are constantly winning people to their cause. Harry sleeps with them in bed every night and according to Eleanor, he gently touches

her face with his paw when he decides it is time to get up and if that doesn't work he will head butt her until she relents and does his bidding. Harry and Sophie are dearly loved!

Eleanor & Allan took Harry to a house in the country where they liked to go to get away from all of the hustle and bustle of the city Harry loved to ride in the car and Sophie was terrified so She stayed home while Harry stayed with his family. While at their country retreat Harry showed his brave heart. Allan and Eleanor were reading on the screened porch. She heard scratching noises and thought it was Harry when Allan said 'E-L-E-A-N-O-R'. She looked up and there right in front of her, a big Black Bear was looking in the screen door.

Harry just sat there watching the bear with lots of interest. He wasn't scared at all - just curious. They grabed Harry and took him inside the house closing the door. Eleanor grabbed her camera thinking that no one would believe her without proof so she took a picture of the bear looking in and sent it to us with the story of her brave little boy. 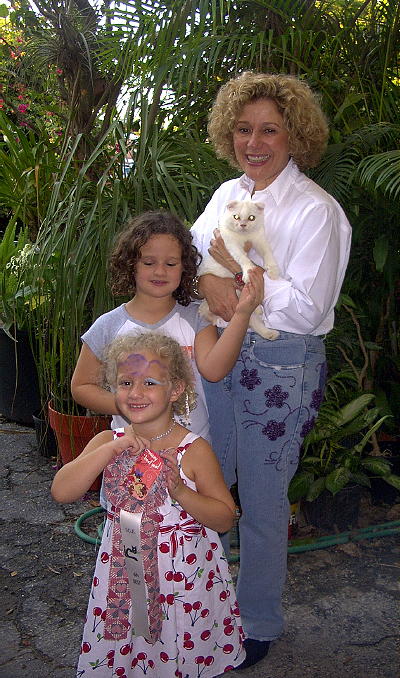 This is Marsha, a Divorce Attorney in Miami, and her granddaughters Emily and Jamie. Marsha was recommended highly by Eleanor above. She is holding her new friend 'Gus' who got the 'best home'. Gus is a Cream & White Scottish Fold Boy.

This is a real 'animal oriented' Family 'The Feketes", their (our) cats and their dog. 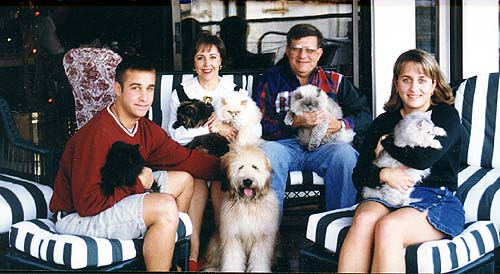 Back to Scottish Folds