This is the Story of Champion Montessori's Mickey Sky. 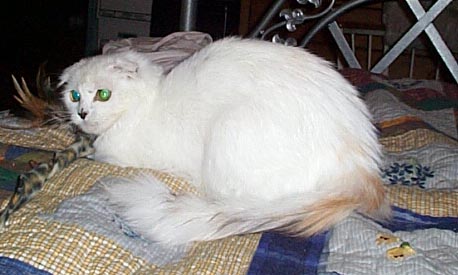 She wanted a special kitten that would grow up and be pretty enough to exhibit and win ribbons at the cat shows. We are extremely pleased that she trusted us.

'I am very interested in a long hair (preferable white) folded ear kitten for showing. I came across your website and saw your beautiful kittens. I just cracked up over the one called Tail Pipe!!! If you have any kittens available or coming soon please let me know as I am very interested'.

That was our introduction to Sheri and we're really happy that she got in touch with us. We sent her some pictures of kittens and there was one that she especially liked. Her decision went like this. 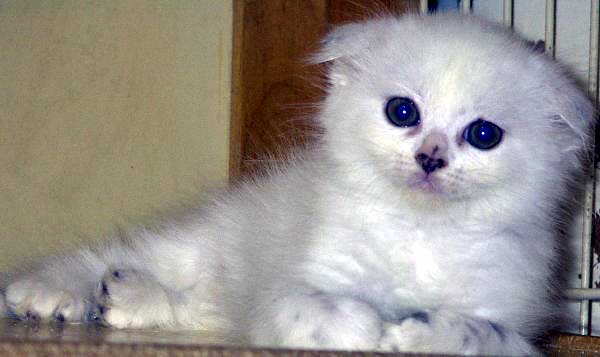 Wow, I am so excited! It is too bad she will not be old enough to show in the kitten class in November. I can't wait to show her off!' There were some other comments in between regarding the details of shipping but you can see her excitement.

'Mickey Sky' finally arrived and Sheri wrote this about her first encounter with her dogs. (Mickey had never met a dog before.) 'She definetely does not like dogs. She hissed and promptly whacked one of them on the nose. 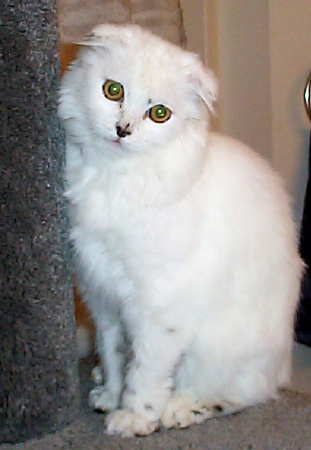 Which I was glad to see since we have jack russells and they can be rather exuberiant. Of course we know that she had never seen a dog before but it was good to know she stands up for herself.' Sheri also said 'She is a love and likes to lick your face around 2am. She also goes crazy for balled up paper. She'll even fetch it! If you crumple up paper, she'll come running in hopes that your going to throw it on the floor for her.'

Sheri has two tabby cats from the shelter right now. One orange male and one brown/tan female. Both are fixed.

She also has 2 Jack Russell terriers, one male, one female, both fixed. They all get along fine except the female cat. She really thinks dogs are quite beneath her! This is Mickey meeting Napolean.

Mickey is doing great! She became a champion this weekend. All 8 judges made great comments about her color. They said she was just beautifully marked!

I think they are tired of seeing tabbies and calicos and that a mostly white fold was refreshing. Thanks again for a fantastic cat!
Sheri

Back to Scottish Folds