This is the cover to an article written about Caprice, my wife, and I in the WEST PLUS Section of the FORT LAUDERDALE NEWS/SUN-SENTINEL on May 7, 1987 and written byDorothy Anne-Flor.

You know you're there when you see the bumper sticker on the car in the driveway that says "Happiness is loving a cat."

What you don't know at first is just how much Caprice and David Townsend truly believe that happiness is loving a cat.

They are in a large home west of Fort Lauderdale, with their entire lifestyle geared to Friendly Felines Inc., a non-profit rescue service for"wonderful tax-deductable cats of all shapes, colors, sizes, and ages." At this moment, their household supports more than thirty; sometimes twice that number are there. Thirteen are their own; the rest are just lucky.

"We have no children, just lots of kitties,"David says. 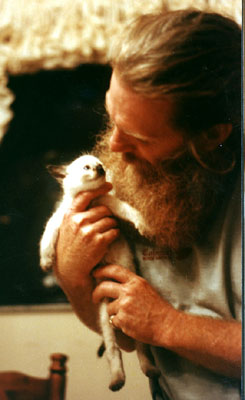 They have Hooey Gooey, so named because affection leads him to moistly mouth the clothing of favorite people. The Townsends feel that he should be forgiven for this because he was rescued from children who were trying to skin him. Now sewn back together, he's just fine except for this minor abberation. Among other "great" cats that share their home is Peanut Butter (same color as); Scottie, a Scottish Fold cat; Misty, an old fashioned Siamese (short legs and heavyset); Pearl, black with white feet; Cally, a calico; and Tiger Lilly, Wishbone, and Cuddles.

"We try not to take in bad cats," he says. "If the cat is not pleasant we don't feel a responsibility. If animals get a break they, too, should be appreciative and give back to life."

Aside from their own, and approximately one third that are rescued strays, the majority are house cats dropped off by owners who can no longer care for them.

These owners are charged from $50.00 to $65.00 for the privilege of leaving them, plus $5.00 to $8.00 monthly for food until a new home is found."Or, they can bring us food until a new home is found. Or, a cage. Anything," David says. "Unfortunately, people pay the drop off charge but few keep faith with the food money, which leaves us dipping into savings to keep going."

The entry charge immediately buys the cat spaying or neutering, shots of all kinds, a medical examination and medical treatment if needed. With the exception of seriously diseased or hopelessly injured cats, none is put to sleep.

New owners are charged $45.00 which promotes respect for the cat, Caprice says. "Very inexpensive considering this person is getting a healthy, spayed or neutered cat with all of its shots. Except for a special animal, such as a Persian or Siamese,, the longer a cat is with us, the more his price goes down."

Prospective owners are sought through cards left with area veterinarians and word-of-mouth. Caprice maintains a large card file of satisfied customers, many of whom remain freinds and recommend the service to others. 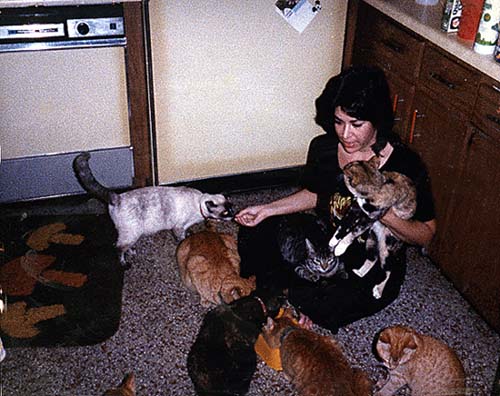 "Our objective is really to try to keep some of the very nice cats alive. Animal Control and the Humane Society do a wonderful job but because of the numbers they deal with they may not be able to place an animal. These organizations end up putting about 15,000 cats to sleep in Broward County every year," David says. "On the other hand, as long as there is some quality of cat life, if we can't find them a home, they can live here with us.

"In general, what they are doing is wonderful. I've inspected their home for my personal benefit because I wanted to know what I was recommending before referring anyone to them," he says.

"Privately I've sent them several people who have brought animals to us but wanted a guarantee they wouldn't be destroyed. The Townsends do this. If they can't find an animal a home, they guarantee it will remain with them for it's natural lifespan."

Caprice adds, "In addition to people at Animal Control and the Humane Society, we've found wonderful friends who help, including veterinarians and two lawyers who donated hours of their time to help us incorporate as a non-profit organization."

One of these lawyers is Scott Fuerst of Ruden, Barnett, McClosky, and Russell of Fort Lauderdale.

"My wife and I have been working with the Townsends helping them place cats ever since friends introduced us several years ago," Fuerst says. "We've found them to be wonderful people, very very careing. They do terriffic work."

The Townsends are the busiest toward the end of summer. People aquire kittens in the spring; by fall many have had a change of heart or cannot take pets if they are moving.

The hardest part is the new cat's adjustment when it gets out of the car and sees all of those other cats. "Many aren't used to living with 30 or more cats and they take one look and seem to want to scream," David says.

It might take a week to a couple of months for a "new" cat to relax. Until they do, they're kept in a cage in the double carport. When the've calmed down, they're introduced to the cat room, a former bedroom where they begin to realize that a clowder is no big deal and they should live in harmony.

Often, people who might want a cat, particularly elderly people, don't care whether they get one that gets along with other cats or not. Neither do they care about the cat's size. "We took in a litter of five kittens less than three weeks old whose mother had been run over," he says.

"We had to bottle-feed them at first and if you do this, they grow up smaller than those who nurse from their mother. But small or not, such kittens become very dependent, which means that sometimes these turn out to be the best people cats."

The Townsends say they can tell a good owner within a 20-minute conversation, "We are strict," Caprice says. Out of ten people who come, they'll turn six away. "But if you meet the test, we deliver," she says. "And, it is especially a real high to deliver a cat to an elderly person."

Caprice is a certified Montessori kindergarten teacher. David spent more than ten years working for the Internal Revenue Service in Miami and Fort Lauderdale "until we had a difference of opinion about collection philosophies,: he says. "So about three years ago I terminated my relationship with them."

When we were first married 16 years ago, David was the bread winner and I was the teacher-housewife in charge of the cats," Caprice says. "Now I have become the major breadwinner. I still do things like bottle-feeding but David faces the world on their behalf." The Townsends add to their income by doing small landscaping jobs, and grow their own vegatables. "We lead a very `60's existance," she says.

"What it boils down to is that we were lucky to have met each other," he says. "Not everybody would do this. For instance, we can't take a vacation. And I spend a lot of time running around to veterinarians and pet stores. And we're dipping into our savings."

"That doesn't matter. It's well worth it," Caprice says.