We DO NOT recommend vaccination for FIP (feline infectious peritonitis).

One of the most poorly understood and enigmatic feline viruses is the feline coronavirus - the virus responsible for feline infectious peritonitis (FIP). It is no exaggeration to say that this is one of the most feared diseases in catteries. Many catteries that remain operative for several years will have a brush with FIP. Despite the fact that this disease is a shared experience in the cat fancy, affected catteries are wrongly feared and ostracized. All breeders need to make efforts to understand this disease and how to control it. 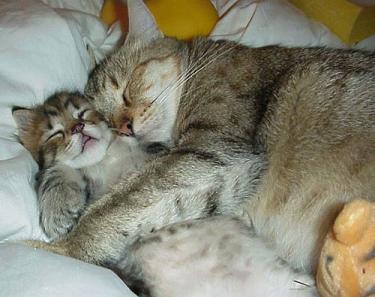 While the first description of feline infectious peritonitis was reported by Dr. Jean Holzworth in 1963, there are reports of clinical cases that are likely FIP going back to1914. Even though we have known about this virus for a long time, we know frustratingly little about it. However, much new research has been done in the past 5 years that is slowly shedding more light on this ever-present feline health problem. This article is designed to present some of the newer information and change some of the older ideas still found in print and other media.

Feline coronavirus operates differently from any other feline virus in several important ways: a) systemic antibodies have no protective function for the cat and may play a role in the disease FIP itself b) antibody titres are meaningless for diagnosis of FIP or prognosis c) a vaccine is available, but there is no consensus on its efficacy or safety.


First, some notes on terminology.

Feline coronaviruses in general are referred to as FCoV. FECV is a very common, highly infectious feline virus. It belongs to the genus Coronavirus, which has members that infect other species (man, swine, cattle, birds, dogs). The majority of cats with FECV (about 95% or more) remain healthy. But in a small number of cases, FECV infection is the first step in a chain of events leading to FIP. This happens because coronaviruses are made of large numbers of nucleotides, the basic unit of genetic material, and they are very prone to mutations. As a virus reproduces itself, errors are made in copying these nucleotides. The more nucleotides, the more errors are possible. While most of these errors are harmless, some will have the effect of giving FECV the ability to cause disease. These mutant FECV strains are called FIPV.

Recent research has shown that mutant FECVs arise within an individual cat. Thus, we now know that the vast majority of cats do not "catch" FIP, but they develop it themselves from their own mutant FECV. Transmission of FIP from cat to cat is considered to be rare. This fact has caused leading FIP researchers to state that cats who are ill with FIP are unlikely to be a risk to other cats and thus do not need to be isolated.

As with so many aspects of FIP, testing remains problematic. To date, there is no way to screen healthy cats for the risk of developing FIP. Antibody titres are poorly correlated with risk of FIP and should not be used to screen cats. As well as problems with interpretation of these antibody tests, there are problems with laboratory quality control. There are newer DNA-based tests offered by a few labs that are purported to be FIP-specific. However, these tests are considered unvalidated by experts as they have not been subjected to scientific scrutiny by researchers outside of the labs that offer them. In addition, there are no published studies that have identified the genetic difference between FECV and FIPV. An article was published by the Cornell Feline Health Center in 1998 warning that the so-called FIP-specific ELISA tests are based on insufficient data and the assays are not yet validated.

The fact remains that we have no screening test for FIP in well cats. Neither do we have a fool-proof way to diagnose FIP in a sick cat.

The gold standard remains a biopsy or findings at necropsy. Recently, Dr. Andrew Sparkes and his colleagues at the University of Bristol, England, have suggested that combining several test results (globulin levels, lymphocyte counts) with clinical findings and antibody titre can help rule in or rule out FIP with some degree of certainty. It remains true, however, that a negative antibody titre does not rule out FIP. Neither does a positive antibody titre rule in FIP as a diagnosis. One benefit of the new DNA-based tests may be their use on body fluids, such as effusions from the chest or abdomen of a sick cat. If virus is found in these fluids, it strongly supports the presumptive diagnosis of FIP.

Probably one of the most controversial areas in any discussion of FIP is Primucell FIP, the vaccine made by Pfizer Animal Health, available since 1991. The vaccine is a modified-live termperature-sensitive viral mutant licensed for intranasal use in cats at least 16 weeks of age. The manufacturer recommends annual revaccination although no duration of immunity studies are available. The vaccine stimulates local immunity and will also produce an antibody titre. Evaluation of the risks and benefits associated with this vaccine is a difficult venture and has engendered much controversy.

Since FIP is a severe and fatal disease, the safety of any vaccine is a paramount consideration. Dr. Fred Scott of the Cornell Feline Health Center, concluded in a recently published paper, that the risks associated with the Primucell FIP vaccine are minimal in most situations. He notes that the vaccine has been in use for 7 years with no increase in the incidence of FIP. Troubling reports of a phenomenon called "antibody-dependent enhancement" (ADE) of infection arose from several labs, where cats vaccinated with FIP vaccines and challenged experimentally with virus developed accelerated disease instead of being protected. It is not known whether the phenomenon of ADE occurs in the real world and there is no easy way to find out. If it does occur, it is likely an uncommon event, but the possibility remains troubling.

This article was reprinted in part from the Cat Fancier's Association, Inc. website with permission.


Entirely too many cats have been put to sleep for the wrong reasons. The Ignorance must stop.

Back to MONTESSORI CATS